The biggest snow storm of the year has hit Toronto and other parts of Ontario. Parts of Highway 401 have been closed off on account of car accidents, poor visibility and poor driving conditions. The police, tow truck drivers and CAA are backlogged with reports of accidents and vehicles in distress. It’s days like these where people ask this personal injury lawyer “how can I avoid getting in to a car accident when the conditions are so bad“?

Well, on this snowy Toronto day, I’m going to share with you Brian Goldfinger’s top 6 tips on how to avoid/evade a car accident in a bad snow storm. If these tips aren’t sufficient, then check out the Goldfinger Guide to Fair Compensation, a copy of which is available at our website here, or you can request a hard copy from our office by clicking a link here.
END_OF_DOCUMENT_TOKEN_TO_BE_REPLACED

If you hit a moose, a deer, or any other sort of animal and you get injured in the car accident, you can’t sue the animal. You can try. But I have a feeling that the animal doesn’t have car insurance, doesn’t have a bank account, and doesn’t have any sort of income; so your case will be bust.

If, per chance, that animal is owned by a wealthy owner (like Bill Gates or Donald Trump), OR any insured owner by that matter; then there’s a chance we can sue the owner for letting their animal get out of control and causing the car accident. I suppose that fact scenario would work in a situation where you hit a stray horse which happened to wander out of its pen and into the middle of a long country road causing you to hit it. In that scenario, we have to ensure that the home owner’s policy, or commercial general liability policy (CGL) covers them for this sort of loss.

BUT, most of the calls we get at Goldfinger Injury Lawyers involve people hitting a moose, or a deer along a quiet country road. You know those signs you see in remote areas which show a symbol of a deer prancing, which are supposed to be deer crossings; or beware of deer because they exist around these parts and they’re a driving hazard. You know that expression “deer in the headlights“. Welll, for city folk like those residing in the CIty of Toronto, deer hazards are likely very uncommon.
END_OF_DOCUMENT_TOKEN_TO_BE_REPLACED

I could end this blog posting there, but you’re probably craving more. I mean, sometimes reading about personal injury law can be so gosh darn enterntaining.

Goldfinger Injury Lawyers gets tons of calls a day from prospective clients. Of all the calls we get; it’s those calls which involve brain injury claims which can be the trickiest to handle.

When you break your leg, or arm in a car accident; you know it’s broken. The x-ray shows it; or the bone might be protruding out of place; or the area that’s been hit might be swollen.
END_OF_DOCUMENT_TOKEN_TO_BE_REPLACED 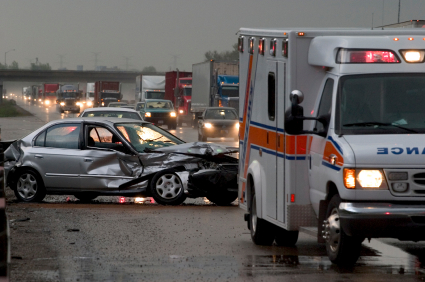 Ontario has a very complicated accident benefits system for car accidents. Car accident lawyers have to keep up with the changes in the laws, which occur regularly.

If you or a loved one has been hurt or injured in a car accident, you are allowed to claim accident benefits. For some, the most important group of accident benefits are those relating to income, caregiver and non-earner benefits. All of these benefits represent money which is potentially available to you in the event that you are not able to lead a normal life as a result of your car accident.

The thing that insurance companies DO NOT tell you, is that you have the right to chose which benefits you would like. This is called an “election”, and there is a special form that you must complete in order to elect one of these three benefits. If you DO NOT elect one of these three benefits, then the insurance company will pick a benefit for you; and it will likely be a benefit which is advantageous for them, and not for you.

END_OF_DOCUMENT_TOKEN_TO_BE_REPLACED

A helmet may protect your head, but it may not be enough to save you from serious injury in a bike or motor cycle accident. Brain injury, loss of limb, spinal injury, skin grafting and broken bones are common place in bike and motorcycle accidents.

END_OF_DOCUMENT_TOKEN_TO_BE_REPLACED

After you’ve been hurt of injured in an accident, there are a few important things to be certain of:

Consult a lawyer who concentrates in accident claims immediately. There is a limitation period in Ontario to sue. This limitation varies, depending on the facts of your case and the sort of accident. But, generally, you have 2 years to sue from the date of the accident. There are all sorts of other limitation periods which you need to be aware of, which is important to consult a lawyer immediately to ensure that your right to sue is protected.

See your family doctor immediately after the accident. Hospitals generally rush their patients out to make room for more patients because they’re so busy. Sometimes people are discharged from hospitals with poor follow up instructions or improper treatment or medications. See your family doctor. They know you best. If you don’t have a family doctor, ask around.