One of the most interesting cases our law firm has ever handled, was a jail house assault matter in Sarnia Ontario.

And things sure did get bad for a client of ours. He was beaten repeatedly with a hunk of cement from a deteriorating jail house wall which was stuffed in to a pillow case to create a sling like weapon. The result was a traumatic brain injury, multiple orthopaedic injuries, along with permanent disfigurement to his fingers and ears. It wasn’t a pretty site.

Where were the guards in all of the commotion? How diid the guards not stop the beating, or prevent it from happening in the first place? Why didn’t the guards see an inmate with a hunk of cement wrapped in to a pillow case to begin with? How on earth does such a violent assaut take place on government premises?

All of these questions and more were asked by the lawyers trying this case.

The Honourable Justice R. Webster provided the following commentary about Jail’s role in the assault in the criminal proceedings:

What disturbs me in this case most of, and I gather from my colleagues who sit here a lot of the time would agree with me, is the lack of supervision in this holding facility. The public, particularly people if you can make a distinction, particularly people who are incarcerated awaiting trial being subject to what was going on in this jail. The province should not be permitted to keep people in jail if they are not prepared to supervise it and to ensure that people are not injured while they are sitting around in a jail. This should not happen. Somebody should be doing something about it. I am not the person that should be doing anything about it but I am certainly able to comment on it. It fills me with concern for the people who are being held in custody under supervision of this province.

The Sarnia Observer has been following the story of overcrowding and dangerous conditions at the Sarnia Jail since August 2009.

“A ticking time bomb is ready to go off at the Sarnia Jail and unless the province reacts to a volatile situation, more violence is inevitable.

The newspaper has reported on an escalation of violent incidents occurring at the jail over the past year. Sarnia courts in recent weeks have heard of a man whose nose was almost ripped off in a shower assault at the jail and of two inmates who were seriously attacked with a piece of concrete wrapped in a bed sheet.

It`s not like authorities were not warned that this would happen. Regional officials were warned by the jail guards union that the situation could turn deadly unless changes are made to the facility. 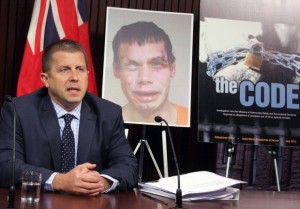 It`s a scary situation which leaves staff with less control. While offenders face the possibility of additional charges, it`s a small deterrent for a criminal who is already coming before the courts on other charges.

To its credit, the union has presented design plans to the Ministry of Community Safety and Correctional Services calling for more holding cells for problem inmates.

Appropriate action in this case would be to renovate the Sarnia Jail immediately to protect both guards and inmates. The present system only promotes violent acts to occur.

It`s a sad state when local judges have to take matters into their own hands and issue sentencing credits for some inmates housed three to a cell.”

“Responding to a recent escalation of violence at Sarnia`s overcrowded jail, a spokesman for the guards` union says he warned regional officials the situation will turn deadly unless changes are made.

Esser said transfers from other facilities and long waits for bail hearings have swelled the inmate population to more than 100 in a facility built to accommodate a maximum of 55.

The jail guards together have a duty to protect inmates. More surveillance cameras and beefed up supervision could reduce the number of attacks, he said.

“When the province says “OK, we`re in charge of you“, there is a corresponding duty to protect that person. This is clearly not being accomplished.

Local judges have begun taking the situation into their own hands, providing sentencing credit for inmates sometimes housed three to a cell.

Justice Mark Hornblower (great name for a judge!)recently granted the victim of a violent assault pre-sentence time credit on a three-for-one basis. It was an unusual move that acknowledged the man`s pain and suffering.”

“The first blow caught Wally Nace on the back of the neck.

Stunned, he dropped to his knees and covered his head. Then punches rained down from all sides.

Nace said his experience is becoming a common occurrence at the Christina Street facility, where overcrowding has created internal tensions and outnumbered guards can do little to prevent violence…

“Someone will be killed. There is no way they should be throwing people in with the lions like that“…”

Why is all of this happening in our jails? Par of it is lack of rescources. But another huge part is th guard culture and the secrecy amongst the guards. We learned all about that culture in the recent case of Jean Paul Rheaume who was beated violently by a number of guards in an Ottawa prison. Here is a link to an article from the National Post on the Jean Paul Rheaume beating along with the prison guards’ criminal proceedings.

The reality is that these sort of jail house beatings are taking place all over Ontario. The London ON jail was recently called a living hell by inmates and guards alike. A recentl law suit targeted the London Jail for its outrageous violence and unsafe conditions.

The goal of the justice system is rehabilitation and re-integration in to society. It’s not putting wrong doers in to a situation wich only fosters a culture of greater violence and brutality. If it’s not safe for the inmates, it’s not going to be safe for the guards either.

Enough law tal? Sure. Pinch me right nowbecause Toronto’s professional basketball team has the BEST RECORD IN THE NBA. I must be dreaming!