Only 1% of car accident cases go to trial.

That means that 99% of car accident cases settle outside of the courtroom.

There are many advantages to settlement. Certainly of the settlement and the lack of appeal rights of the parties to the settlement come to mind. You control your own destiny in a settlement vs. the uncertainty of the trial process (and appeal process thereafter).

This is very important because if you win big at trial, there’s nothing stopping an insurance company from tying up the case for many more years through their appeal rights following a trial.

But I don’t want to focus on settlement in this edition of the Toronto Injury Lawyer Blog Post. What I would like to focus on is what happens when a case actually goes to trial, in front of a jury.

Jury trials need to be requested by one party or the other. They aren’t automatic. A party will file a Form 47A Jury Notice. Some cases (such as cases against a Municipality) forbid jury trials.

Hundreds of people will receive jury duty notices in the mail. Those potential jurors are rounded up in a room at the Courthouse. Their names are cast in to a drum, and then selected at random. This is called jury selection.

There are 6 jurors in car accident cases. Lawyers can challenge 4 jurors.

What does a jury look like? Go to your local Tim Horton’s. Take a look at the 6 people standing in line waiting for their coffee. That’s what a civil jury looks like.

Unlike in the United States, lawyers in Ontario are NOT allowed to ask potential lawyers dozens and dozens of questions to eliminate them. There aren’t any Matlock moments in the jury selection process in Ontario where you’re able to secretly discover that a potential juror has hidden prejudice which will jeopardize the case.

Here are some interesting things which jurors are NOT told about car accident cases. If lawyers for the Plaintiff accident victim try to inform the jury of these facts, then it’s likely that the Judge will declare a mistrial.

The facts which aren’t disclosed to a jury can include:

3) The insured Defendant isn’t the person calling the shots on what to do for the case. It’s the insurance company. 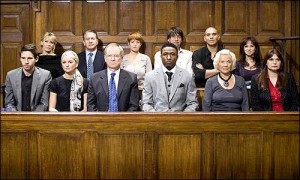 4) If any money is awarded against the at fault driver Defendant, that money is NOT paid out personally from the Defendant to the Plaintiff. It’s the insurance company which pays out the award, AND LEGAL FEES for the award and for the case. The Defendant driver again does NOT pay anything out of pocket. This is a fact which many juries aren’t aware of in the context of car accident cases. That’s why you have insurance in the first place.

5) The Plaintiff is facing a $30,000 deductible for motor vehicle accident claims below the sum of $100,000. So, if a jury awards a Plaintiff $95,000 in their car accident case; $30,000 gets subtracted from that $95,000; thereby resulting in an award of $65,000. Now, the jury awarded $95,000. But they didn’t know and aren’t told in the course of the trial of the $30,000 deductible; so the $95,000 award which they agreed was a fair sum to compensate the Plaintiff is reduced by $30,000 to $65,000. This seems completely unjust to me. I don’t understand why juries at the outset aren’t informed of the $30,000 for car accident cases. I believe this would impact how juries assess cases; but this is how insurers want it. They believe juries to be fair and honest. But what isn’t fair and honest (it’s underhanded) is not giving the jury ALL of the facts so that they can fairly compensate an accident victim for their pain and suffering. The jury ought to have the right to know and be educated of this deductible. But they aren’t. I firmly believe the reason which they aren’t is because knowing about a $30,000 deductible would outrage them and cause them to award the Plaintiff a significantly higher award to ensure that the Plaintiff gets them compensation they deserve. Think about it: some of the people on the jury might not make $30,000 all year long. And then they’re being told that right off the bat, $30,000 MUST come off the top of the Plaintiff’s award? Who thought that one up? I guarantee you this: it wasn’t anyone sitting on that jury.

6) In addition to a $30,000 deductible, the Plaintiff also has to combat a threshold for motor vehicle accident claims. Regardless of who’s at fault, if the Plaintiff’s injuries aren’t serious and permanent, then the Plaintiff will NOT be able to recover any form of compensation. It has become standard that Defendant insurers bring so called “threshold” motions at the conclusion of trial. These threshold motions are NOT heard by the jury. They’re heard by the Judge sitting alone after all of the evidence has been entered. If the Judge sides with the Defendant, and agrees that the injuries to the accident victim do not meet the threshold; then regardless of what the Jury says, no money will be awarded to the accident victim.

7) Juries are told by Defendant lawyers to make decisions which are “fair and just”. But how can they make such decisions if they don’t have all of the facts surrounding how the threshold and how the deductible work.

8) Juries are NOT told that any money which the Plaintiff receives in the form of collateral benefits (income replacement benefits, long term disability benefits, CPP Disability Benefits) get off-set from any past or future income loss claim being asserted by a Plaintiff against a Defendant. This again goes to the root in terms of how a jury can make an informed decision whey they are deliberately NOT being told all of the facts surrounding compensation in personal injury law claims.

Jurors work hard. They take their jobs VERY seriously. They want to make sure they make a just and fair decision. I have always been amazed and impressed at the level of seriousness which jurors approach their job. But the task is daunting in the context of a motor vehicle accident case when considering the complexity of car accident cases and all of the law which is deliberately NOT shared with the jury.

If a jury was told right off the bat that $30,000 of ANY award which they grant to the Plaintiff will vanish, how do you think a jury would react. The first question they might ask is why does $30,000 automatically vanish? Then the lawyer, or a judge would have to explain the history of deductibles and what the Ontario Government has done….

If a jury then asks where the money is coming from, shouldn’t they also have the right to know that the money doesn’t come from the insured at fault driver but rather from the large insurance company?

Here is a link to an interesting article which speaks out against jury trials in the context of car accident cases. I don’t agree with this article but I thought it was important to our readership to understand that there are some seeking to abolish the civil jury trial.

do believe that the jury has the right to know EVERYTHING about how the law works and what the result of their decision will be before they make a ruling. If the jury is told everything, their decisions will be more reflective of their will as jurors and they will be able to make more informed decisions. Don’t we owe that to our hard working juries? I think so.

Enough law talk? Sure. I’d now like to focus on Toronto’s professional baseball team. Even before the season has started, three projected starters are LOST to serious injury. Can you believe it?!?! Unlucky or Toronto simply a cursed professional sports town? The jury’s still out on that one.

In other news, 3 professional football players in the NFL retired this week. What was interesting is that all of them retired BEFORE the age of 30; and that all of them retired on account of injury; or fear of sustaining injury. For all 3 players, they’d rather be functional and coherent in their later lives and leaves millions of dollars of guaranteed salary on the table; rather than risk injury. Brain injury and concussion were the two major factors leading to their retirements.