Clients always want to know what sort of damages they can claim in the long term disability case. As previously discussed in the Toronto Injury Lawyer Blog, damages in a long term disabilty case can be limiting.

Unlike a car accident case, there is usually no wrong doer, or tort feasor for the allged long term disability giving rise to the claim. It’s not like a masked bad guy came in the middle of the night and whacked the Plaintiff with a baseball bat and caused them to suffer from fibromyaligia, depression, anxiety etc. Normally, the disability giving rise to the claim is an unfortunate health condition, which nobody would wish upon their worst enemy.

In these sort of instances, when there’s no “bad guy” we can poin the finger at; then there’s no claim for general damages, or pain and suffering damages as they’re commonly known.

The money from these long term disability claims comes from the value of back payments monthly LTD payments owing from the insurer, to the insured. If successful at trial, a Judge will likely re-instate monthly LTD benefits, such that the Plaintiff continues to get paid on a month to month basis.

But clients always want to know what other damages are available in these sort of cases. It’s a very good question, because monthly disability benefits are capped at the monthly disability amount, less any set off (CPP, WSIB, etc.). This can be limiting. But there is potentially more compensation available to a claimant, depending on the nature of their claim.

A recent Ontario Court of Appeal decision addressed these “additional claims” in the context of a Long Term Disabilty Claim.

In Fernandes v. Penncorp Life Insurance Company , the Ontario Court of Appeal upheld a $200,000 judgment for punitive damages. But, it reduced a judgment of $100,000 for aggravated damages/damages for mental distress.

Mr. Fernandes was a bricklayer. He was born in Portugal. English was not his first language. He had known manual labour his entire life without advanced reading or writing skills. In around December 2004, Mr. Fernandes fell 8 feet to the ground off scaffolding and injured his back. Two days later he fell again from a distance of about three feet of a trailer, and again injured his back. Following both accidents, Mr. Fernandes could not return to work as a bricklayer.

At the time of his injury, Mr. Fernandes was just 40 years old.

Fortunately for Mr. Fenandes, he had long term disability insurance which he believed would cover him for lost wages in the even of injury. He made a claim for benefits and was denied.

Sound familiar? Sounds like A LOT of cases we see at our law firm.

After surveillance was obtained by the insurer, along with sending them to their own “independent” doctor, the insurer denied the claim for benefits.

At trial, the Plaintiff was entirely successful in their claim. On appeal, the award for punitive damages was upheld at $200,000 stating:

1) Punitive damages are designed to address the objectives of retribution, deterrence and denunciation, not to compensate the Plaintiff.

2) They are awarded ONLY when compensatory damages are insufficient to accomplish these objectives
3) THye are the exception rather than the rule
4) The impunged conduct must depart markedly from ordinary standards of decency; it is conduct that is malicious, oppressive or high-handed and that offends the Court’s sense of decency
5) There must be an actionable wrong
6) A breach by the insurer to act in good faith will constitute an actionable wrong
The Court found all of these factors in the Fernandes case and upheld the $200,000 award for punitive damages.

The award for aggravated damages/damages for mental distress was different. It was reduced from $100,000 down to just $25,000 for the following reasons:

1) The term “aggravated damages” is misplaced in a case for mental distress arising from a contractual breach.

2) The Court must be satisfied that an object of the contract was to secure a psychological benefit that brings mental distress upon breach within the reasonable contemplation of the parties AND, that the degree of mental suffering caused by the breach was a degree sufficient to warrant compensation (not easy to prove).

3) In this case, there was no explanation how the trial judge arried at the figure of $100,000 or what facts justified awarding this amount. The award appeared to be too high to the Ontario Court of Appeal, based on previous cases where aggravated damages were awarded.

What was overlooked in this appeal was that at trial, the Plaintiff was awarded full indemnity costs in the amount of $212,130.

On appeal, the quantum of full indemnity costs was reduced by $30,000. 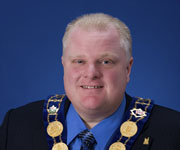 There are certainly other ways to claim damages, above and beyond the regular monthly disability payment amount in a LTD case. These damages are NOT the norm. They are reserved for special and unusual circumstances which the Court must find the be aggregious and high handed. It is certainly possible, and it does happen. No insurer wants this sort of decision made public, and put on the record. It’s not good for business and public relations, but it does happen.

Enough law talk? Sure. Anyone catch any of the recent Toronto Mayor Debates? What a laugh! I’ve seen grade 8 debates with more decorum. I’ve seen high school candidates do a better job at focusing on the issues, and focusing on the questions.

My favourite part is when they yell and promise outlandish and unreaonable things like: I will spend a kazillion dollars on subways, without any regard for a budget. What’s a budget? Oh..don’t worry about money. I’ll get it from the province or from the federal government. Or, it will magically fall out of the sky. Or, if you promise it, it will magically arrive. Kinda like Field of Dreams.

Then the candidates will spend another kazillion dollars on parks and social services. Then they will also decrease taxes and spend more money on parks. Then they will throw a pizza party for EVERYONE’s birthday! Promise the moon and deliver what. I’ll tell you what will be delivered.

The next mayor of Toronto will get in to office and say that it’s a mess and that nothing can be accomplished because their predecessor left such a huge mess.