The first wave of calls have come in following Toronto’s Ice Storm of 2013. Lots of angry and frustrated people out there. But who can blame them?

The ice storm has been called the most devastating storm to hit the City of Toronto and the surronding area in decades. Some call it the worst storm EVER.

Our thoughts go out to the thousands of families who remain without heat or power around the GTA. Our Toronto Office at Yonge and Sheppard was without power for 3 days. Business came to a stand still. But having not power at our law firm pales in compairison to all those without heat or power in their homes for the holidays.

This is where COMMUNITY comes in to play. Be a good neighbour and check up on the elderly, disabled, or those who live alone. Don’t leave fires unattended. Don’t use a generator inside of your house. Make sure that the batteries in your carbon monoxide detector are working. 9V battery? put your tongue to it. If your tongue burns; then your battery is good. No burning? Then no power. That’s some caveman advice for you.

One of the biggest misconceptions during the storm were the reporting numbers of the amount of people left in the dark. The Hydro Authorities and Municipalities identified the number of “customers” without power. The term “customers” does NOT mean people. This means buildings, houses, businesses etc. Reporters in the media didn’t seem to understand that customers didn’t mean people. So, when they heard customers, they confused that number with people.

Toronto Hydro estimated that each customer represented around 2.5 people or so. Accordingly, 1 customer = 2.5 people according to their estimates. So, when Toronto Hydro indentified that approximately 315,000 “customers” were without power at one point in time; that meant that 787,500 people were without power (or MORE according to their estimates). This distinction between “customers” and people is SIGNIFICANT as the multiple increased by 2.5x.

If you’ve been out and about driving around the GTA, you’ll notice all of the fallen trees on the ground. These aren’t just small branches that we’re talking about. LARGE HEAVY trees have come down as a result of the storm, causing damage to power lines, homes, vehicles and even people too.

Some callers to our office want to know if they can sue ANYONE over the property damage to their home or their vehicle.

That all depends on the circumstances of the damage.

Before we get too deep in to this topic, keep in mind that the limit for Small Claims Court has been increased from $10,000 to $25,000. $25K ain’t so small, and the great thing about Small Claims Court is that you DON’T need a lawyer to represent you; unless you’re acting on behalf of a corporation. Corporations need lawyers or licensed paralegals to represent them in Small Claims Court, unless otherwise ordered by the Court. Here’s a great guide published by the Ministry of the Attorney General on how to make your own claim at the Small Claims Court Level. A LOT of the property damage calls in to our office have been below $25K. Those sort of cases are best suited for paralegals, not lawyers. If you’re looking for a paralegal to assist you, we can certainly point you in the right direction.

In addition, you should know that many property damage claims will likely be covered by your home owners’ insurance OR your car insurance. If you’ve sustained some form of property damage as a result of the ice storm, contact your home insurer or auto insurer and make a claim. What’s the worst that’s going to happen? You get denied? Not a big deal.

Your neighbour’s tree falls on your house, causing damage to your home. Can you sue your neighbour for the damage?

First, report the claim to your home insurer. If your home insurer covers your claim, and repairs the damage, then you’ve sustained no losses/damages other than your time and the headache. Hence, you won’t likely have a claim because there aren’t any damages you can go after. If the damages to your home cost $20,000, and your insurer pays you $20,000 for those damages; or repairs those damages to a tune of $20,000; then you’ve sustained ZERO LOSS.

The law prevents you from double dipping in Canada; meaning you can’t get $20,000 from your insurer; in addition to $20,000 from your neighbour. Courts also normally don’t award damages for headaches and lost time on account of an Act of G-d ice storm. 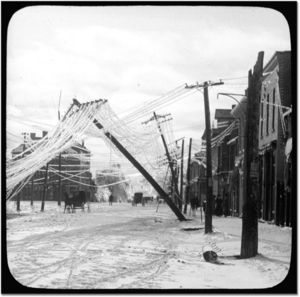 If the tree which caused the damage was a City Tree, then you’re dealing with a whole new kettle of fish from a legal perspective. If you’ve followed my Toronto Injury Lawyer Blog, you will know that suing a CITY is entirely different and more difficult than suing a MUNICIPALITY/CITY. A City will NOT be held to a standard of perfection. We will need to find some sort of “gross negligence“. Something beyond mere negligence. Something like you calling the City everyday for the past year for them to remove that large, old, rotting Oak Tree from your front yard, but they never got around to it. Then the Oak Tree falls on your house, crushing it to pieces and you didn’t have adequate home owners insurance. The damages to your home exceed $200,000. That’s a case.

In that example, the City will likely be on the hook for their gross negligence. Just because a City Tree caused damage to your property during the ice storm does not equate to a sucessful claim.

Can I sue the City for being without heat or power over Christmas. I mean, their infrastructure is terrible and they knew or ought to have known this was coming.

You can sue anybody for anything. I can sue Kathleen Wynne right now for running advertisements which I believe are annoying. I can sue the Toronto Raptors for sucking years of emotion out of my life for being such a terrible franchise.

Will I win either of these cases? While I like to think I’m an excellent lawyer, I know that both of these cases are losers from the get go. But, I can still sue if I chose to do so. Just remember: justice for losing cases costs lots of money; so be prepared to pay if you have a case which a lawyer won’t take on a contingency fee basis.

I agree that the City of Toronto’s power infrastructure is terrible. I mean, who installs live power lines above ground near large, mature trees in a cold weather city prone to snow, rain and ice? Makes no sense to me, but it was a purely economic decision when it was made. Cheaper to put the lines on top of the surface rather than dig below ground. In any event, I’m sure that somebody will try to advance this claim; although I think it will be a difficult one to establish. Who knows; there might be some notes in the City Register advising the powers that be that this day was going to come and they should have done something about it, but never did. Still a very difficult case.

I slipped and fell during the ice storm on a sidewalk or driveway. Can I sue?

Yes you can. BUT, this will be a VERY tricky case as the weather was awful during that period of time. Canadian Tire along with gas stations across the city were sold out of salt during the ice storm. Those slip and fall cases will be very tricky because the Court will look to whether or not the property owner acted reasonably to clear their ice. The definition of what’s reasonable during the worst ice storm in years will be a tough one as the city was brought to a complete halt during the storm. Those case will be tough, but they will depend largely on the facts surrounding the case, along with the credibility of the parties involved.

One observation I made was the lack of police at major intersections after the storm. Most major intersections had no power, and the traffic lights weren’t working. I didn’t see any police officers on traffic detail making sure that there weren’t any accidents while the signals were out. BUT, I did notice paid duty police officers at some high end retailers and grocery stores conducting traffic detail while the power was out. This was disturbing and if anyone got in to a serious car accident at an intersection which wasn’t lit, I’d be pleased to chat with you. It make me sick to my stomach seeing that the needs of corporate retailers superceded the needs of the public.

I wish you and your families a happy holiday season and a happy new year. Let’s hope that’s the last we see of aggressive weather this winter.